The most stressful part of our trip was finding a parking lot for Susan’s car at Newark. For someone who plans way ahead, why she’d not thought of parking was a mystery.

The six-hour flight was long but totally uneventful. We found our way to the shuttle to take us to our car and we were away through the afternoon San Francisco traffic to San Jose, where we were greeted with hugs from our friend, Janey at about five o’clock Pacific time (watch said 8:00). We had delicious hamburgers made according to a recipe from the New York Times before settling in for a short evening of chatter.

Janey is a political science professor at Santa Clara University with a specialty in Central and Eastern Europe. She has written extensively on Poland and Russia from the 1970s, when she was a foreign student in Poland forward through Communist control, the time of martial law initiated in 1983, the breakdown of the Communist system, to the present situation in both countries. Last week, Janey received a significant award for her sustained scholarship from the university at the Faculty Convocation. 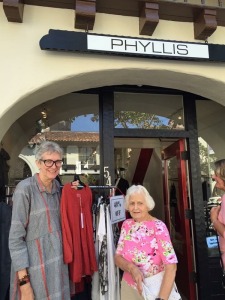 Have you seen the “Gates of Hell?” I have. While only three original bronzes of the mold by Augustus Rodin were cast and can be found at in Philadelphia, Paris, and Tokyo, there is a copy of it and many other bronzes by Rodin at Stanford University. The most copied portion of the sculpture is the top “The Thinker.” I’d been there before but I was anxious to go back.

We walked Janey’s university and visited the 1777 Santa Clara de Asis mission church. One of the twenty-two missions built by Franciscan missionaries along the California coast, it was constructed from adobe in Spanish style architecture. Olive trees, an original planting, grow along a roofed arcade.

After touring around town with Janey, Susan and I headed to Santa Cruz to a whale watch on Monday morning. There weren’t large numbers of animals in the bay to watch, but enough of them emerged and raised their tails out of the water, slapped them down and disappeared. While the boat’s captain tried to follow them, the whales had other ideas and would reappear where he didn’t expect them.

To accomplish one of Susan’s sightseeing goal, we visited the Henry Cowell State Park. Cowell realized the towering redwoods were about to disappear due to clear cutting, so he purchased several acres of this riparian forest and set it aside in perpetuity. We had a just right and delightful walk on a three-quarter mile Redwood Loop trail. In one place where several young trees had formed a single trunk, I was able to crawl into a little room and stand up in it. Volunteers also walked the path to answer questions about these treasures of the forest.

Tuesday morning, Susan and I discovered we’d both done something dumb. We were packed and ready to head to Yucaipa between Los Angeles and Palm Springs. She put our suitcases in the trunk. When she slammed it closed, she realized the keys were inside it. No problem, she thought, the front is unlocked. Not true.

While we waited for the man to come and unlock the car door, I asked, “Did you take the candy and nuts for Pat and George?”
“No, they are in your brown bag, aren’t they?”
“No, I checked and they’re not there.”

Janey, hearing us, went back inside and soon came out with a large plastic bag that held several dead leaves and one small bag of maple sugar candies. Sunflower, her Polish spaniel, had stolen and eaten a pound of maple coated peanuts and a half-pound of maple candies. I had thoughtlessly left my suitcase and brown carryon unzipped. Cats don’t steal things like candy, or at least, mine doesn’t.

Instead of leaving at 8:00 as planned, we left at 10:00 for the nine-hour drive south. We traveled through miles and miles of agricultural land with fruit stands advertising 10 avocadoes for $1, a box of peaches for $4, apricots, tomatoes, and oranges. We saw truckloads of oranges heading to market, beef cattle and sheep in endless pastures. Then we climbed over the desert hills into southern California.

Richard’s youngest and only surviving sibling, Pat, and her husband, George, greeted us along with their huge dog, Max, that stands to my waist. A small rescue, Penny, was afraid to come close enough to where I sat to pick up her ball from the rug.

The next day Pat and George took us up into the San Bernadino hills, where the colder temperatures allow apples to grow. Workers were busy picking in the orchards. In the evening, more family, their son and his family came for dinner. We’d not seen them for the past fifteen to twenty years since. It was fun to get reacquainted.

The day had been a respite from driving or in my case, riding. With good advice, we took the northern route across the Los Angeles metropolitan area to Santa Barbara before turning to follow the coast back to San Jose. We visited two more two-hundred-year-old Spanish style missions, Santa Barbara and Santa Inez near Solvang.

This Norwegian village maintains it original character complete with a windmill and made a great stop-off for lunch before beginning the long drive up California Route One that tightly hugs the coast up, down, and around mountain after mountain. Once begun there is no turning off this two-lane highway of about 200 miles. 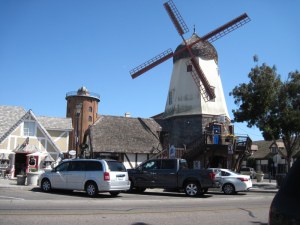 The views of water, waves, and coast line are stunning. At every turn in the road the ocean sweeps up to the shore below you. In the hours as we drove north the ocean colors changed with the angle of the sun. The mountains embrace your right. Many places the curves are so sharp, I was happy to be on the mountain side and not along the ocean. We watched and took dozens of pictures of these elephant walrus as the older ones lounged and flipped sand onto themselves. Younger ones challenged one another standing on their tails. 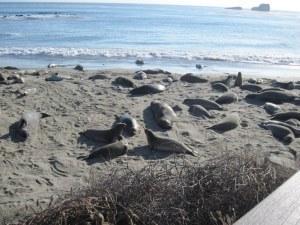 We hoped to be back north to Monterey by sunset, but instead we stopped at one of the many pull-offs the state has provided. We watched as the sea changed to gray and sun slipped slowly toward the other side of the world. 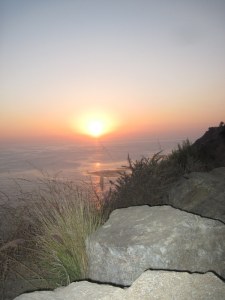 When we finally got to Carmel, we began looking for food. It has been a long time and distance from Solvang. The main highways were offering nothing. Desperate, I found bag of caramel popcorn in the back seat. We grabbed handsful and stuffed them into our mouths.

Finally, in Salinas the road went into the city and there was the Black Bear Diner that was still serving and welcomed us with an excellent meal.

After leaving Pat and George at eight that morning, we arrived back at Janey’s at 10:30 to spend the night before taking off the next day for Redding.

Friday was only a planned four-hour drive. We had time to drink our coffee, chat with Janey and her daughter, Megan, before leaving a little after ten. This was Susan’s full last day in California. We drove to Redding where we met our friend, Carol.

Redding is a hot city, and I mean by temperature. It was well over 90 when we arrived at the hotel. Redding’s most noted tourist sight is the Sundial Bridge. It is a pleasant park where we joined a small crowd to walk as the sun set. The glass pedestrian bridge crosses the Sacramento River where a white functional sundial soars over two hundred feet into the sky.

Susan left at eight the next morning for the San Francisco airport and to return our rental car. Carol and I left for Chiloquin, Oregon, where I happily spent the next week. Our tourist visits were two: a museum of Native American history with many sculptures, many similar to Remington’s, and the Crater Lake National Park. The rest of our time together was just that—time to be together.

Crater Lake, the result of the mountain’s life as a volcano 7,700 years ago, is round. A small pointed island in the middle, which is now also covered by trees, is from a subsequent smaller volcano. When my husband and I visited Chiloquin in 2004, we went to the park 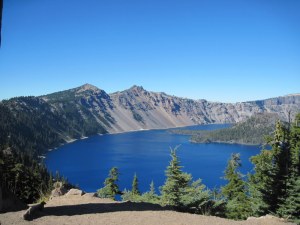 with Carol and her husband, Pat. That September day we wore borrowed winter jackets and were still cold in the light rain and freezing temperatures. Last week’s September day was warm. The sun was shining making the water appear a clear bright blue. Fed only by rain and snow, it may well be the purest water in the world. 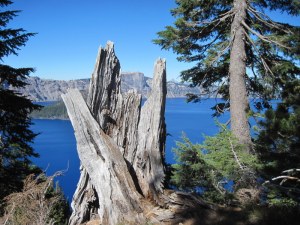 The evening before I left Carol’s, we were invited to a party to meet all her friends—a great group. I left her in good hands the next evening when I took an overnight Amtrak back to San Jose for one more day to spend with Janey before flying home.

On September 28 I begin the 59th year of my life. My fifties have been grand, and I have so much to be thankful for. In no particular order, following is a list of 59 things that I am tremendously …

Three thousand miles from home in the desert area of Oregon, I am sitting with my friend, Carol, of too many years to count. Not true. All those years have counted. We’ve know one another since our children were tots. I am visiting.

We sit for hours sharing events of the past and present, simply comfortable in one another’s company having coffee or a glass of wine. Neither of us feels compelled to “top this.”  We don’t have to go someplace. Being entertained is not on my agenda. I’m happy sitting here or reading in the sunshine while Carol makes ink paintings or checks her email.

Last week my daughter, Susan, and I spent time in California visiting a friend in the San Jose and traveling to Yucaipa to visit relatives. Between times we went on a whale watch, saw the redwoods, and the coast from Santa Barbara to Monterey.

I’ve been nearly the entire length of California. From San Jose, Susan drove me to Redding to meet Carol. Altogether we went a few hundred miles before my daughter left me to fly back to the East Coast. This weekend I will also fly East, but meanwhile I’ll enjoy each hour here. 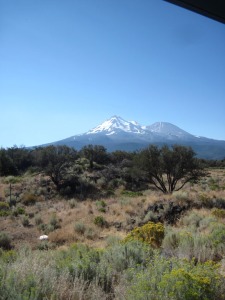 On our trip from Redding to Oregon, we found this great view of Mount Shasta.